The Episcopal Church strives to live by the message of Christ, in which there are no outcasts and all are welcome.  Walking a middle way between Roman Catholicism and Protestant traditions, we are a sacramental and worship-oriented church that promotes thoughtful debate about what God is calling us to do and be, as followers of Christ.

St. Paul's Episcopal Church follows a traditional liturgy and practices open communion. All baptized persons may receive the Holy Sacrament of Eucharist. Christian Education is offered for all ages. St. Paul's is a vibrant member of the Greater Grand Forks region, reaching out to many diverse groups such as Phoenix School, Northlands Rescue Mission, and the Community Violence Intervention Center.

The Episcopal Church has had a major presence in Grand Forks since the founding of the city in the 1870s. St. Paul's official beginning was on January 16, 1880. The church celebrated its 125th anniversary in 2005. St. Paul's draws its membership from all facets of Grand Forks and the region, including the University, local businesses, medical, military, and agricultural communities.

The original church building was located in downtown Grand Forks, about 15 blocks north of its present location. It was destroyed by fire in the late 1940s. The sanctuary of the current building was erected in 1949, with a split-level education wing added later. That wing was destroyed during the flood of 1997 and demolished to make room for the new parish hall, which was dedicated to God's service in May 2000.

Worship at St. Paul's centers around the Eucharist. Most Sundays Rite II is used. Alternate forms of the Eucharistic Prayer are rotated regularly, as are different versions of the Prayers of the People. High mass with incense and bells is celebrated during Christmas and Easter. Less formal services may also conducted at this time for those who prefer them.

To find the lessons for any given day, click the link below:

St. Paul's practices open communion. All baptized persons are welcome at the altar. We invite you to come and celebrate who you are - the Body of Christ.

Lay people are actively involved in worship services at St. Paul's, as ushers, readers, acolytes and Eucharistic ministers. Anyone interested in becoming more involved with the worship service is invited to contact the parish office for more information.

Children are valued at St. Paul’s. We invite families to encourage spiritual development by modeling faith and enthusiasm for the work of the church. Help the children sing hymns, pray, and voice responses. Feel free to explain parts of the service. Children learn liturgical behavior by watching and copying. If you need to leave for a short time, please feel free to utilize the nursery. Please come back especially to share in Communion and then fellowship following the service.

Adult inquirer classes are offered periodically to those who wish to learn more about the Episcopal Church. Contact the church office for information.

Rt. Rev Keith B. Whitmore The Rt. Rev Keith B. Whitmore Assisting Bishop in the Diocese of North Dakota as we complete the discernment process.
Rev Harvey Henderson, Priest in Charge Fr, Harvey was born in Winnipeg and studied for his Master of Divinity at Huron College, on the campus of the University of Western Ontario. He was ordained to the Priesthood of the Anglican Church on Feb 2, 1983. He served for five years as the Director of Huron Church Camp and a number of Interim postions around Ontario, as well as serving as Associate Priest at St Mark's Anglican church in Branford, Ontario. He moved to North Dakota in 1995 and served as Vicar of Trinity Episcopal church in Wahpeton until its closing in 2000. He then taught Philosophy and Religion at North Dakota State College of Science in Wahpeton. From there he served as Interim Pastor or supply in several Lutheran congregations in Minnesota and North Dakota before becoming Lead Pastor at the Prairie Rivers Parish in Richland County. Fr Harvey retired from the College in the spring of 2019 and preached his last sermon at Wyndemere Lutheran Church in August. After a month of retirement, he agreed to serve as Interim at St Paul's until a new Rector is called. In July 2020, the Search Committee and Vestry unanimously voted to end our search, and appoint Fr Harvey as our Priest in Charge. 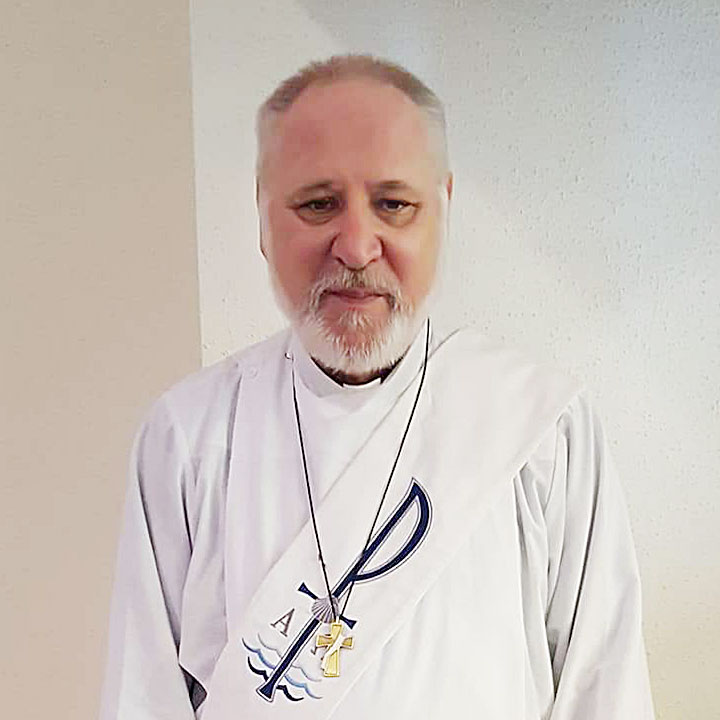 Rev. Donald F. Leroux The Rev. Donald F. Leroux was ordained a deacon at St. Paul's on June 30, 2007, by Bishop Michael Smith, following a three-year training course offered by the Diocese of North Dakota. In addition to his duties as Deacon, Rev. Leroux serves as an Altar Guild member, Sunday School Teacher, Men's Group coordinator, Memorial Committee clergy member and trains both acolytes and Eucharistic Ministers. He was appointed by Bishop Smith to serve as a member of the Diocesan Evangelism Committee and is able to officiate at baptisms, funerals, and lead services in the absence of the Rector. Deacon Leroux also serves at Church of The Advent in Devils Lake. He and his wife, Mary, have four grown daughters and ten grandchildren. They enjoy preparing meals for Men’s Nights, St. Patrick’s Day, and an Agape Meal. Rev. Leroux also leads an Annual Veteran’s Day service. 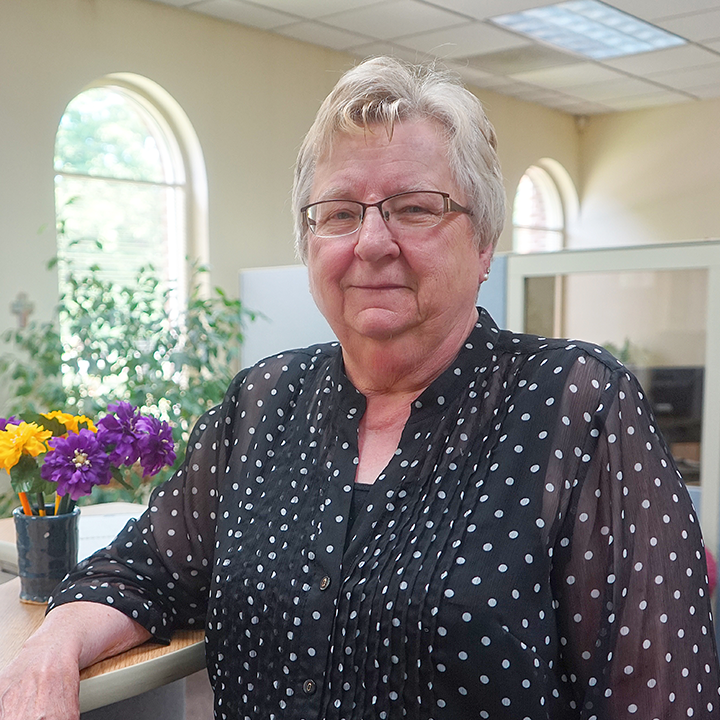 Carol Johnson
Secretary Carol Johnson, our secretary, joined St. Paul's in August of 2006. She and her husband Bob came to Grand Forks from Jamestown. A member of Calvary Lutheran Church, she provides both sanity and ecumenism to the office. 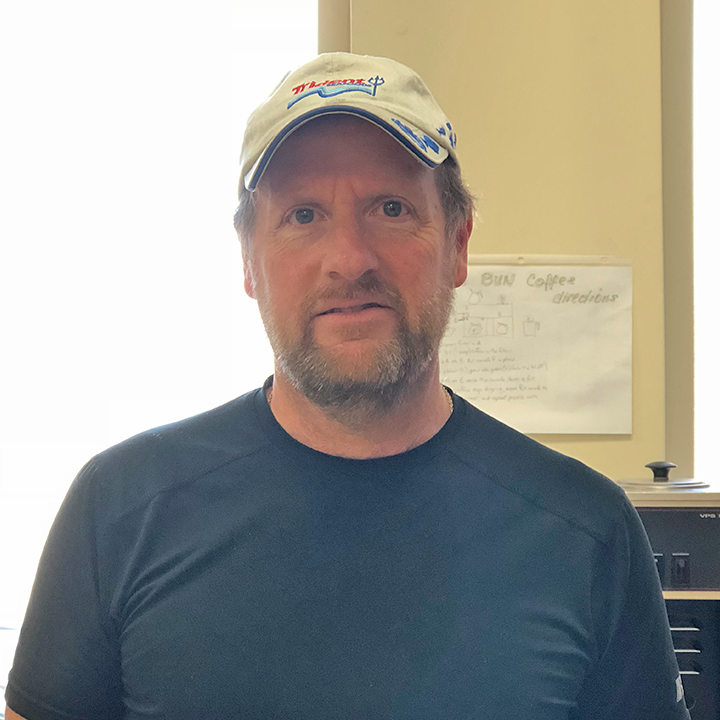 Doug Woodard
Sexton Doug Woodard, church sexton, is the invisible man of St. Paul's. Doug may not be seen, but his work around the parish is most visible - and appreciated! Doug keeps the building and grounds in tip-top shape.

The Episcopal Church sees stewardship as more than simply contributing money to the church; it’s also about contributing time and talents, and volunteering for ministry and mission. We’d love to have you share your gifts with the church family.